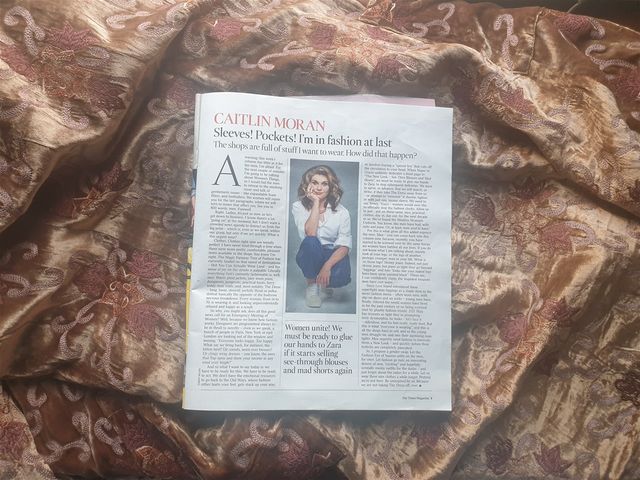 The old pantheist that I am, adhering to all possible and impossible religions - I have over the last three years or so, been a parishioner of St Bride's Church. This adherence began accidentally three years ago, when I read an announcement on Facebook - that I was still using at the time - advertising a "Guided tour at St Bride's Crypt, Sunday, 11 am".

Here I went, Sunday 11 am, all dressed in black, as one does for a crypt walk on an October morning, and stepped into the soft, warm light of St Bride's to find a well populated church and a servitor telling me "Well, I don’t know about a Crypt tour, but we are having a morning service now and you are welcome to stay".

Here is the place to mention that for me, Christianity was my "coming of age rebellion" as a teenager attending an Islam teaching Arabic school in a communist country before the fall of the wall; raised in a family where both parents where militant atheists. Obviously, I had to get baptised.

Back to October 2018: here I see myself ushered to a comfortable wood furbished... place of peace... sandwiched between, as I'll discover next, a mighty organ and an unearthly choir singing Hosanna in the Highest....in order to find myself praying a few minutes later for the wellbeing of all journalists around the world; and for my pen to be sharp, truthful and sincere. Did I look back? No, I didn't. A member of the Bulgarian Union of Journalists since the mid 90s, I told myself "This is my Church. This is where I belong ".

Last having been in an Orthodox Church in my twenties, attending weddings, baptisms and funerals... did I notice that the priest was actually a... priestess? No, I didn't. At least not until somebody three years later mentioned that their wife wouldn't attend St Bride's since the reverend appointed was female.... Did I fail to notice previously that the Reverend Alison was a woman? No, I didn't. Alison is obviously a women and she looks natural at St Bride's. Did it ring a signal of alarm in my mind initially? No, it didn't. If anything, it struck a pillow of comfort, so as that I even forget to tell myself "Oh, look, the reverend is a woman!" Not to mention what a good preacher is she is - you have to be quite an orator to be able to preach to journalists and for them to listen.

Anyhow, here I am, three years later, attending the Autumn Harvest Service and feast afterwards - in celebration of this lucky chap who has been a St Bride's parishioner for 71 (seventy one!) years - soaked in shampoo, champagne some call it, discussing CW’s article of last Saturday with another good, old journalist - a regular Guardian reader, who has a Saturday Crossword Club, under which pretext she/they get/s ... The Times on Saturday, obviously for no other reason... and while this old gun-of-a-pen, I don't mention the name because carried along with the conversation I didn't think to ask permission to mention names, than she and her mates do the massive Saturday crossword ... well they also read ...Our Lady of Fun and Wisdom, otherwise known as Caitlin Moran. She said she laughed yesterday at the top of her voice just like I did, with CW’s article, see above. And especially at the bit about The Evil Fashion Eye that has eventually spotted men and made them stuff themselves into skinny jeans. What larks.

Dressed in her... shall we say, what? 30 years old gear? Blue jeans, multi pocket leather vest and a neat boisterous, hair dye free hair. There she was, the old-gun-of-a-pen asking me what The Dress was. It's not that CW hadn’t described it right, but apparently my new acquaintance hadn't seen it yet. So she asks “Is it a flower pattern dress with a long sleeve?”. Yes, I answer, and it is also long and loose. Here you go, you fashion fellows looking through your dim windows in Paris, Milan, New York and East London - you can keep The Dress on for at least another decade and half of us wouldn't have even noticed it by 2030 - so we will still buy it when we eventually spot in London or Ashgabat.

Conclusion: We love you all CW. And I can tell you, and not by means of providing the Dubai Modesty Fashion Show with an advert - which I will start doing from tomorrow officially - this is what the so-called "modesty" Fashion show had attracted me with - wide trousers, wide shirts, headgear; corresponding to my old-time view that skinny jeans have merely a skin-deep sex appeal.

At a later date I will be telling you CW, about Muslim "modesty" and what it conceals. And basically, when they tell you, CW, about the "clash of civilisation " and about the "projection of Orientalism'' on Middle Eastern Cultures and how wrong it was... I can say, yes it was wrong, because it failed to reveal the real grandeur of the libido hidden underneath. The real size of the desire, hunger and yearning; veiled, sleeved and trousered therein. Have you lately checked on LAAF's 'Fashion ' subpage? Can I just say that based on it LAAF was made Modesty Fashion Show 2021 media partner... right? What larks!

Other than that, I would like to mention hypocrisy. This is not to say the hypocrisy in church. In church there isn't more hypocrisy than there is abiding in the bosoms of society - one hour of fervent mask-wearing during service, followed by one hour not wearing a mask at the following feast, when we, the congregation were stuffed in only a third of the space that we were occupying during the service and this under the pretext that we were eating and drinking... Like in an aircraft, crews are very serious about mask wearing unless you eat and drink; if you stuff your face throughout the flight, the mask could be down though. Yet, when I full heartedly said that this country, has done the right thing regulation wise on the subject of mask wearing - giving people enough information and free choice to wear a mask - comparing it with France where mask wearing is compulsory, even for those with psychological and other conditions; all I got was one step back from the people I was talking to and gentle, but uncompromising withdrawal. Whenever dialogue is stopped when I express my mind - I know I am talking to Labour voters. Labour voters and activists have a very specific way to shut down D I A L O G U E. They just don't recognise it as a phenomenon. Probably because they are aware that ideas are contagious, like viruses, and are very cautious not to get exposed to any. And here, I think, abides the key to the Labour Party's lack of future prospects. It was not Blair's stupidity, Corbyn's character or currently, Starmer's lack of such. It is because every normal person has likely met at least one Labour voter who has cancelled dialogue the minute they've heard an opinion different from theirs.

PS: I have two points to make about the parliamentary report of the Government's handling of the COVID-19 crisis and its conclusion that the Government is to blame. First, I cannot and will not forget that this Government was two weeks late to lockdown the country and few months late to suggest that mask wearing is useful in the case of an airborne virus. Secondly, I am blaming tens of thousands unnecessary deaths on a useless NHS - the same NHS that each and everyone of us paid a high personal price to save. There is a rotten practice in the NHS not to give antibiotics to patients suffering from severe viral infections under the pretext that a virus is not a bacteria, regardless of the fact that severe viral infections lead to inflammations curable only with antibiotics. "It takes two to tango."

Yes, the Government unnecessarily exposed many of us to the virus for far too long, but then the NHS failed to cure far too many out of basic incompetence. To my mind, the big failure of this Government, isn't the failure to lockdown the country; but to have failed to realise what a massive, criminal-killer of a structure the NHS is in practice. Or, wait a minute, maybe the Government knows it only far too well, hence the motto: "Stay home. Protect the NHS". For this is what you do when you know that there is a massive bully out there - advise people to stay home. Oh, and don't forget to vaccinate. Even though you saved the NHS by staying home these last two years, if you fall ill now, the NHS won't save you.