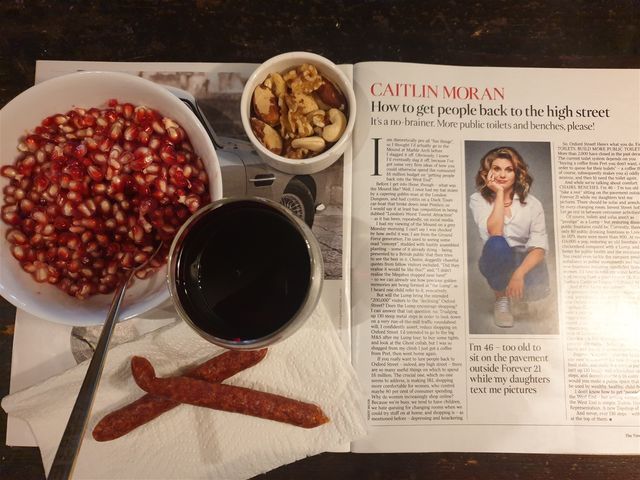 the use of extreme cold in surgery or other medical treatment.

One cannot always have Our Lady of Fun and Wisdom for breakfast. One, sometimes, has her for lunch on a Sunday.

On the menue are all things red, apart for the nuts: saucissons - unfortunately not Français - pomegranate from Ali-Baba's Cave and Malbec from the Nisa, which once was Co-op.

I am not sure what happened with the Weather Regulation around food chainstores around Islington post-Brexit; but one thing is certain: in Nisa, M&S and Sainsbury's, haven't been to Tesco's lately, the Siberian ventilators are turned full on, as goes the Bulgarian saying from pre-Fall of the Wall times.

Say today, I enter Nisa wearing my black summer dress, while my favourite security man there is in turtleneck pullover, a ski hat, hoodie, duvet jacket, ski gloves and a scarf in lieu of a mask. I ask him, as usual, "How are you?" Only to make sure he is still in cryotherapy and sperm, not corps, preservation modus - after all he spends there eight hours a day. For him the Sibérien ventilators has been turned full on since Nisa-Nasa has possessed what used to be a tiny Co-op. Which makes me wonder if Nasa has a secret project consisting of training black people, disguised as security guards and casiers, for astronauts - getting them ready for the cosmic frost quoi - at the expense of the food-chainstores. Or maybe even better: may be Nisa is a disguised Nasa?

I wanted to write about this long time ago, but then I hesitated for two reasons; one altruistic and one egoistic: If the Siberian turn cosmic frost is not part of a secret Nasa project put in place in Nisa, then once having alerted attention to it, Nisa may decide to take £1 off its staff wages for cryotherapy.... and another £1 off for sperm/egg preservation.... and yet another £1 off for corps preservation in the case of death... That's my altruistic frown. Otherwise Nisa, as well as the rest, should pay its staff for working in hostile store-weather conditions. My egoistic frown : What if Nisa decides to charge me for cryotherapy while shopping instead of compensating me for shoping in challenging store-weather conditions?

Now having voiced the problem I wounder whether I should go in contre-offensive and send Nisa the bill for all the paracetamol that I had to take after the long, cold moments spent in their shop staring at their poor white wine selection, only to go away with a bottle of a red. Nisa will figure out how to split the bill between themselves and M&S and Sainsbury's and all the other cryotherapy comercial spaces. My knees and toes are still frozen - after having written all this - and having already eaten half of their silly chorizo and drunk half of Co-op's remarkable Bio Bio Malbec.

Ali-Baba's Cave on the other hand is my favourite food shop predominantly because of the customer-friendly weather it displays at all times - probably because Ali-Baba, and his brother, work in person there.

Relevantly irrelevant: I am hyper grateful to the lovely boy standing by the escalators of John Lewis, who when I asked where to get a dental airfloss, told me "Don't move", went and got it for me in the frame of a minute. Which is exactly the level of service one expects when in cryotherapy spaces.

Therefore dear Lady of Fun and Wisdom, YES 100% : Sanitation, Hydration, Representation, Recycling! I am hundred per cent behind you on this, I will just like to add "And a nipple-friendly store-weather" if possible. I am sure that healthy air circulation is fesable at 21°