Which is the Better Team? Team Iran vs Team Ungodly Ayatollahs

Who would have thought? Who would have thought that FWC 2022 would take me back to my childhood straight into кино Мир/Peace Cinema, and the bitter sweet tears I shed whilst watching Haathi Mere Saathi/ Elephants Are My Companions, which at the time was translated in Bulgarian as Слонът моят приятел/ My friend the Elephant.whilst holding my mother's hand.

Who would have thought that FWC would become a fair rival to Eurovision and surpass both Holly and Bolly Woods in drama delivery?

Home alone, with no mum or pops to hold onto, I cried before the beginning and before the ending of this epic Iran vs Wells FWC2022 game. Bitter tears of fear at first, happy tears of relief at a bright ala HoBollywoodesque happy end at... well.. the end.

This time, unlike the last time, when England played Iran, I am not simply sitting on the sopha whilst staring at the screen and talking on the phone. Now I pay attention. As soon as I start paying attention I start crying, because Tram Iran looked like… singing - only later on it dawned to me that what they were actually doing was just opening and closing their lips, like if saying Paa-Paa-Paa, not even mimicking. - Anyway, at a first glance I think they are singing and I start to cry. I can't say whether I am crying more bitterly than when I was 7 or 8 - not only Western, but also Eastern, it will appear, influences reached the old Soviet-Block with big delay - and watching My Friend the Elephant side by side with my mother. It might be that the quality of pain, suffering and crying remains the same through one’s age. Possibly of giggle and laughter too *.

Come halftime I find myself with problems of my own: after taking the hair-dye bonnet off, somehow and for an unknown reason, I find myself with a revolutionary blood-red instead of the expected Dracarys-whitish-blond hair... The howl, the pain, the tears... How? How on Earth this Pre-Pandemic 2020-old dye found itself in this Post-Pandemic build-back-better 2022 new dye box? I have no idea. It must have been all this revolutionary and football stress. I tell myself "Shush, shush now. It's only a messed up hair-dye, not a broken bloody skull" as I continue weeping.

No time for tears on spilt personal milk though as the second half is starting.

Watching Team Iran playing better and better I am starting to ask myself: Could it be that instead of threatening the Team the Ungodly Ayatollahs have bribed it? And if yes, how? Did they offer them an extra 513,328,747.50 Iranian Rial for each mouth opening? Or some extra Houris in Jannah? And if yes, how much extra-Houris - one, two? Or both Rial and Houris?

After Team Iran's first goal I am telling myself: Actually, it could be that the Ungodly Ayatollahs struck by owe in the face of the uprising have remained still and frozen and it was Team Iran that have contacted them and told them "See what we can do!? If we now pretended to sing your anthem, the whole world would think you've threatened us and harmed our families".

After Team Iran's seconds goal I am certain: Yes, yes, Team Iran has called the Ungodly Ayatollahs and told them "HEAR our conditions: First, you agree not to touching our families and to give us 513,328,747.50 Iranian Rial each for each mouth opening and we agree to say Paa-Paa-Paa at your ungodly anthem. Second, for each goal you agree to give azadi to the women (for one goal) and man (for a second goal) of Iran + to give us, Team Iran, an extra-Houri in Fardous (a goal). Capisce?!" And the Ayatollahs knowing that they are the ultimate losers with no positive movement left for them to make, silently agree. Because after all, Team Iran are the better team.

As the second goal brings me to this visionary revelation I jump shouting YES YES and BRAVI BRAVI and cry happy tears of joy. And because free people play, work, love and live better than enslaved ones, I now know that the people of Iran are already AZADI.

What happened to the hair? Whilst the revelation described above was unrolling before my inner eye, it also spotted a solution for my hair-problem. After the match I dyed it once more, this time with the correct, post-pandemic dye. The result is an of-the-hour Blooded-Victory Dracarys White… basically a dragon’s breath reflected on Daenerys head.

* For this last one you don't have to believe me, just watch Philomena Cunk on BBC iPlayer. 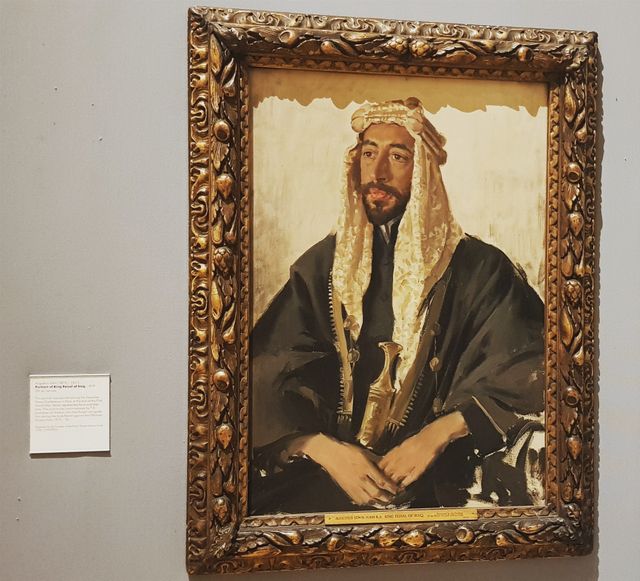 ... in Birmingham Museum & Art Gallery. King Faisal of Iraq oil on canvas portrait from 1919 by Augustus John. Strangely this is the opening piece of the museums' British Contemporary Art Rooms.