Sixteen artists are to be seen on shop windows in Santander, Spain in the frames of the project Arte Paetonal*. One of them is Gorka Mohamed.

Gorka Mohamed was playing piano and doing art studies in Barcelona, when in the nigt of 19/20th of March 2003, while American bombs were falling over Baghdad, he decided to go out and draw some Iraq-related graffiti around Barcelona. Just by the time he was writing "Iraq" next to one of his tiny surreal characters, Police spoted him and started chasing him around "Like in a Buster Keaton's "Cops" chase scene" he says. After the incident, Gorka sacked both piano and graffiti and went studying more art. First in the States, then in London's Goldsmith's.

Native Spanish speaker Gorka, who happens to be my cousin, is now in Madrid, working and studying Arabic with big zeal, of which his father Amjad, originally from Mosul is, obviously, very proud. While I am mindblown - studying Arabic midlife should be harder then the midlife-crisis itself. Could it be a good antidote to it? Mind you, if one doesn't have children to abandon, nor wife to whom to do the I-am-going-for-cigarettes-and-come-twenty-years-later trick, also known as Gaugin's Tobacco Trick, a version of which I myself did few years back; learning Arabic must look as an attractive midlife-crisis choice.

At the same time while Gorka studies Arabic, for some reason the spellchecker on my sillyphone Samsung Galaxy 9, doesn't admit the existence of such a thing as Mosul, it underlines it each time and offers alternative choices such Moselle, Moseley, Mossley, Mostly and Moulton. Indeed, my sillyphone spellchecker has become utterly useless lately, and more precisely three updates ago. Else to say, Samsung Galaxy spellchecker is in a Mosul-denile. A Mosul negationist quoi.

The imaginary normalisation of Mosul is what, I think, Gorka is doing with "Good Morning Mosul" - picturing a Mosul waking up with a cup of tea and the view of Al Hadba' Minaret. 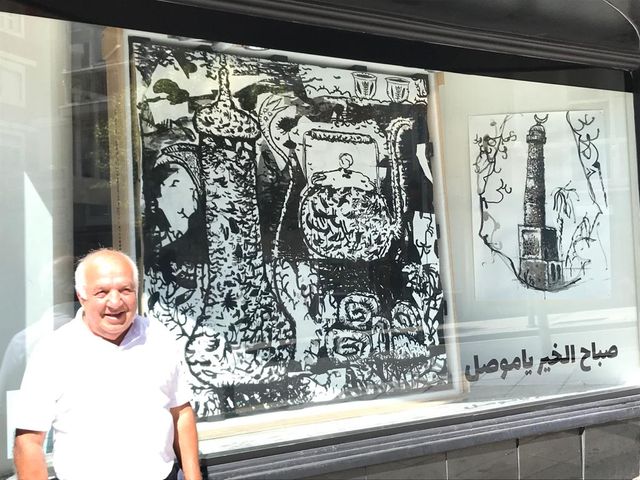 After the success of the calls from previous years, the 'Peatonal Art' initiative returns to our streets in its third edition in September, a unique and different activity that invites us to look at and explore our city from other perspectives, through a different perspective . On this occasion, sixteen other creators will show their works in unusual places, gaining open spaces for people such as shop windows, which, on this occasion, will have the interesting and ephemeral function of an art gallery close to everyone, at street level. We once again have the sponsorship of the Government of Cantabria and the collaboration of the Santander City Council.

The exhibition will bring together works by 16 established creators in different techniques and disciplines, all in full view of the pedestrian. The intention is to create an itinerary through the center of the city of Santander to enjoy the temporary exhibition, bringing art to the street. The collective will take place throughout September 2020. The inauguration will be held on Friday the 11th at 5:30 p.m. starting at Castelar street to start the tour following the 18 participating establishments and consolidating the appointment in the cultural calendar of Santander and Cantabria.

The project aims to attract the public by inviting them to enjoy walking through an open and accessible exhibition space that favors small businesses and dialogue with artists at the same time demonstrating the importance of art and how it positively impacts the life of the city. temporarily transforms, generating a feeling of identity and opening a channel between fashion, commerce and art.

The disciplines today have been broken and fashion shares spaces with art, art looks at fashion as a somewhat superficial phenomenon but fashion and art can be related and, from time to time, rub against each other. One of the windows will host a performance with video projection and dance, alluding to the theme of isolation, loneliness and routine ... as a vital experience during confinement." A presentation by curator Maria Arantzazu Vidal Lopez Tormos

Spanish-Iraqi Goldsmiths graduate Gorka Mohamed is at residency in Madrid this year; will be at residency in Lebanon next year.  While Galrie LMR, Bordeaux will present his art at Bienvenue Paris art fair later this month, October 2018

One day of Gorka in London

I meet Gorka Mohamed at Berwick Street. He loves it for its many record and comic shops, and restaurants. He spends hours in Reckless Records and Gosh Comics, shoulder-to-shoulder with the tens of other customers.

It’s crazy how busy both shops are. Gosh blows my mind. There are comics on every possible subject, style and age. I am absorbed by the ‘Shop’s Favourite Selection’. I didn’t know that Neil Gaimon had comicised lots of his books.

Byron on Wardour Street is also a favourite of Gorka’s because of the continuous  screening of old, black and white cartoons.

Seeing the Super Power Girls, he can’t resist asking for a picture.

Later on, we want to see the new Blade Runner movie, but we give up - all shows in Soho are booked. It’s Sunday afternoon, after all.

The next day, Gorka is flying to Madrid where he lives now.

At Reckless Records
At Gosh!