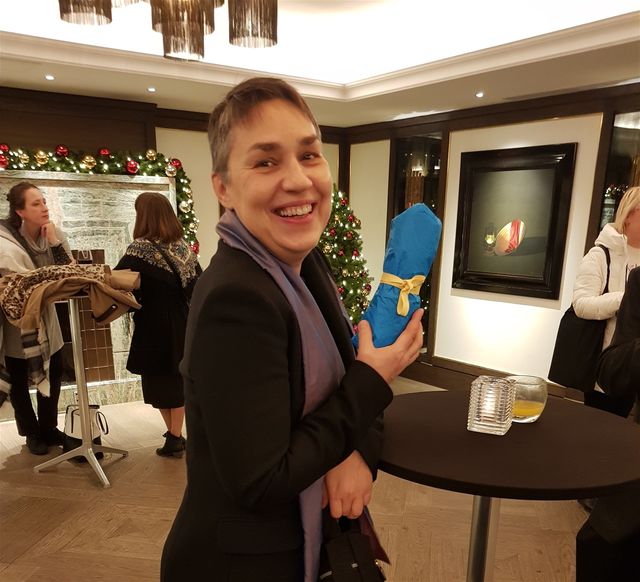 A couple of ceramics fishes, one of them gutted, the other still swimming to bare witness. 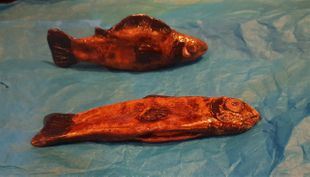 Silent Witnesses from the Sea of Azov

About her home town Komsomolsk-on-Amur Svetlana says: "It is a place known as AmurLag ("Amur" as it stands on the left bank of the Amur River and Lag from Lager/ЛАГЕРЬ, camp)."

Located in the Far East, just north of Japan, Komsomolsk-on-Amur is one of Russia's "secret towns". Or as another friend of mine put it "There are only military, militsioneri (Soviet version of policemen), convicts and scientists there."

"You can find it on any map (even the smallest one), because the place is a military base with around 170K modern slaves living there to produce military aircrafts MIGs and nuke submarines.

There, now you know how much she knows about "silent witnessing" ...

For more on Svetlana Kuznetsova and her art www.sk-art.london 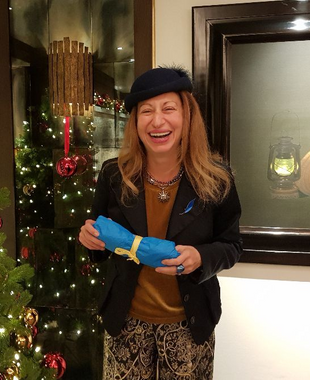 As active as your average genius might be, Svetlana Kuznetsova passes from one project to another with a grace and energy that’s easy to envy.

“LAAF… art is not exclusively in the big galleries and West London”, she says in lieu d’invitation. And LAAF knows to listen well when being talked to by a genius.

Thus, I found myself on a mild Sunday 28th January, at noon, at a very animated and populated event at Turnham Green Station. Chiswick Timeline: A History in Art and Maps celebrates the installation of sixteen massive, historic maps on both sides of the Tube overpass - starting from 1593 and ending at 2018. Inset, are 23 works of art showing Chiswick landmarks made by renowned artists from very different times.

The opening celebrations are organised with taste and flair. There are two interactive art projects, both clever and inspiring, attracting scores of enthusiastic participants. Svetlana’s ‘Chiswick in Ceramic: Put your House on the Map’, for which Svetlana had made excellent ceramic models of Chiswick landmark buildings (being an architect is one of Svetlana’s many genius selfs); while Kathleen Tuffy and Tanya Saunders have provided what looks like hundreds of blank ceramics of buildings, large and small, for the public to draw on and turn into their own house, and then position on a canvas map of Chiswick.

This project mostly attracts the young. While Ekta Kaul’s ‘Chiswick without Borders: Link your family origins to your home’ lures grown-ups who diligently use swallow-shaped pins to mark, on a canvas map of the world, their countries of origin and link them to Chiswick with differently coloured wool threads.

I conclude from this that, should Noah build a modern ark to preserve couples from all nationalities in the world, he need look no further than Chiswick.

And, while the young are engaged with construction in Svetlana’s project; the grown-ups ruminate on their origins; the third age has given itself to rock’n’roll - supportively clapping along some odd fellows singing Donovan’s and Young’s tunes. Quite impressive. Chiswick has everything in its place.

But, that’s not all. There was such a thing as a Free Lunch (!?!): delicious soup (ginger and sweet corn) by Ginger Whisk and healthy bread rolls by Hen Corner. Obviously, a Labour constituency, I think. Which Wiki confirms, later. The Chiswick Timeline art biscuits by Bonnie? Better to look at or better to eat? I’m still not sure. Certainly, very good to look at. And very good to eat.

Just before I go, I’m handed a brochure about Chiswick Timeline Art Trail which contains 17 spots ‘to see Chiswick as shown in art’. It contains must-see places such as the house where Pissarro lived while in England, and the house of Hogarth, open to public. This certainly puts Chiswick on LAAF’s Summer Tours map.

For Pissarro’s paintings of Chiswick, and other places in London, visit the exhibition.

‘Impressionists in London’ at Tate Britain, until 7th May 2018.

For Svetlana Kuznetsova and her art www.sk-art.london

Thanks to the first snowfall this year, the long awaited New Year Card by Svetlana Kuznetsova is ready.

Dedicated to both the new coming year, and Putin’s newly announced  2018 presidential campaign; the card is loaded with references, such as the motto engraved on the three rakes and shovels, GULLAG’s unwritten law :

“Mum, find out where Kadyrov gets his clothes from.”

How would I know what he might be thinking while living in a totally different country?

I often wake up to a strange query or eccentric demand texted by my son. What makes them even stranger is the total lack of context.

Hmm, I say to myself, let me check who Kadyrov is in the first place.

Never voluntarily admitting to the absence of knowledge, I text back ‘Give me a minute’. Having learned from my mother’s mistakes, I’ve disciplined myself to take interest in my son’s interests when invited; thus, I’ve familiarised myself with Futurama, Death Note and Grand Theft Auto.

Today, on a delightfully sunny Sunday morning, I start the rather dark journey through Kadyrov’s Wikipedia entry, articles, videos and pictures. A sombre figure takes shape: a hereditary hybrid between an Asiatic kaïd and a Soviet nomenclatura. With typical Islamist beard (blond!)  and typical sovietchik military orders of distinction on his ‘sportswear’, Kadyrov could have been a laughable figure - if it weren’t for his war-crimes, state privatisation, mafia-style racket of the whole population, suppression of women, persecution of gays, assassinations of journalists and last, but not least, hereditary renegade status.

Having also learned from my mother’s mistakes not to be judgmental, after one hour of research I text my son back ‘But he dresses like a mountain peasant on the border of civilisation - invented signs patched on sports gear, so who cares who makes them!?!’

Then again, after two hours, ‘His wife makes his gear. If not her personally, then her fashion brand’. This time I receive a response ‘Not sure. Double check it’.

As a mother, I never admit to a task being out of my reach. I don’t say things like ‘Are you nuts? How will I find a primary source that confirms that Kadyrov’s wife hand sews his clothes?’ or ‘Do you expect me to call a fashion brand in Grozny and ask them to confirm they tailor the Head of State’s garments?’.

Instead, I text ‘Ok, I’ll double check right now, I know just who to ask’. I don’t have a clue, of course, so I just go on with my day. Reminded by my calendar about Parallax Art Fair, I go out into the chilly afternoon. Chelsea Town Hall is a wonderful building, the art fair the usual mess of paintings, photographs, drawings, jewellery, painted silk and stained glass.

I walk around thinking ‘Hmm, not this, not this, not this’. It’s too stuffed with low key art. Artists look desperate, it's mainly them looking at each other's’ art. ‘Are you an artist?’, somebody asks me. ‘No’. I’m afraid to disappoint, but he looks relieved and gives me his business card.

They all look desperate. It seems unfair, this art fair.

I stroll around. Then I see it - Svetlana Kuznetsova’s stand. Was it the gold? Was it the skulls? The red stars? The familiar old symbols? The dead flies? Or simply the different quality of the artwork?

There’s a wonderful wooden coffin with a prayer written under the glass sarcophagus. This little model has captured every single bit of the monumentalism of the system that the artist seeks to bury. There’s a small animal skull with a jewelled crown; ‘Putin’ the author explains. The skull has golden coins of Tsar Nicolas for eyes. I ask if I can take a picture. ‘Yes’. Svetlana stands next to me. Kadyrov cuddling a cat pops onto the screen the moment I activate my phone. Oh, the embarrassment!

Yet nothing, it seems, can embarrass a Soviet-born woman and artist. ‘This is Kadyrov’, she says, pointing at another small skull topped with a tiny Chechen hat.

She tells me that Kadyrov’s mother is the head of his racketeering organisation, the one that takes 10-30% of the income of every Chechen citizen; and that this racket also concerns the Chechen expats in Russia. ‘While this is us’, Svetla says, pointing at numerous dead one-day flies. There are also bigger flies, bumble bees, bees and beetles. There is also a skull representing the Orthodox Church and another one. They all have golden rings, earrings and cufflinks, inherited family jewels, stuffed in the orifices of what were once their mouths, eyes and ears.

There are golden medals and Red Order stars, all awarded to Svetlana’s grandfather, a veteran of the Great War. Apart of this small model of everything that has to go, but still hasn’t, Svetlana has another object, sadder and funnier at the same time.

This represents all the deficits that she and her people had experienced during the ‘bright future’ as the Eastern Block used to call the communist time. In golden letters, are the words; Sausages, Panty Liners, Meat and plenty of others. This object is called ‘We Are Closed For Lunch’.

She talks about her sources of inspiration; shares her dream to invite her favourite contemporary Russian artist, Vasily Slonov, and wonders if, exhibited in London, he will provoke the interest he deserves. I say, ‘Certainly, yes’.

I take a lot of pleasure talking to Svetlana, who explains every object in detail. She is open, forthcoming, richly informative and funny.

Generous and cordial, Svetlana promises to make a picture of the contemporary Russian cuisine for London Art and Food. We discuss the concept. At some point, I remember my morning mission and ask her ‘Do you know who makes Kadyrov’s clothes?’ ‘Ha! The fashion brand of his wife’, Svetlana says.

I leave Parallax Art Fair happy. One discovery is enough.

‘You made my day’, I tell her on my way out. She sends me an air kiss.

On the bus, I see a man and a woman kissing. They turn and smile at me.

On the Tube, I see two young girls cuddling and smiling at each other in the opposite window.

I think of Kadyrov; ‘I wish you to discover homosexual love, as every love is a bliss. It might help you see a glimpse of this heavenly garden of which you will otherwise be banned’.

Mission accomplished. Confirmed, I text my son, ‘Kadyrov is dressed by F*rdaws, which in Arabic means a garden, the heaven reserved for the pure’.

To see more of Svetlana Kuznetsova 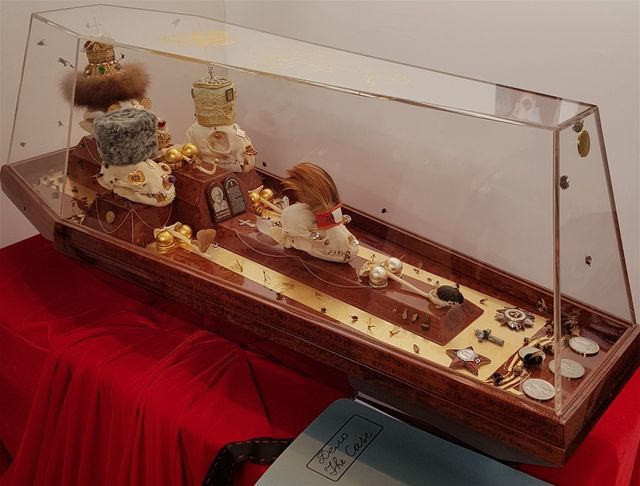