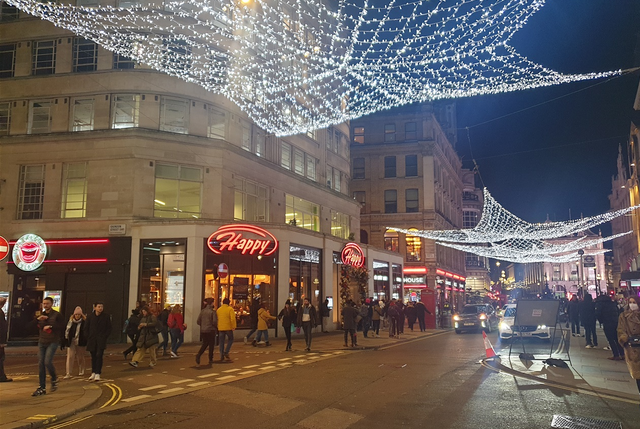 Under bright stars : Comedy Store on the far left and Happy on the left, Piccadilly Circus

The only thing I can say about Happy, being the oldest Bulgarian restaurant chain, is that since 1994 when the very first Happy opened its doors, or shall I say laid its greasy plates?, it immediately became the main hot-dispute family spot; and more precisely the only eternal subject of discordia between my father and myself. With my father always wanting to organise family gatherings - birthdays, namedays, weddings and funerals - in Happy; and with me never wanting to go there. With our viewpoints being the following:

Me: Why would anybody choose a fried chicken fast food parlor - upgraded to a “restaurant” only because it also serves alcohol, is huge in size and number of tables and is located at one of the most emblematic spots of Sofia - for a family meal?

My father, who doesn’t eat meat since 1985 and drinks one in a blue moon: Because of the fast food service.

Me, fully understanding how deeply my father has been traumatized by the slow, quasi inexistent service predominant in the restaurant of pre 10th of November Bulgaria: But dad, nowadays service is speedy almost everywhere.

But my father doesn’t want to hear, neither this nor other arguments of the type that no matter where you are in Bulgaria you are never more than 20 min away from an eating place on the top of a mountain or at the shore of a lake or at the beach of a sea. Which is why, say, Sofia has become so attractive to me in later years: Not so much for the gourmet as much for the magnificent scenery where one can eat.

Anyhow and back to Happy. Its menu initially contained mostly various chicken recipes of which my usual choice mid nineties was some sort of chicken alla Milanese: battered white chicken breasts, served with cream and green piece farfalle. Despicable, I know, but that was the most sain dish on the menu, I swear. In addition, for some reason the chicken was always pre-cut to thin ribbons, as if one would have been unable to cut it oneself. With time passing and the opening of new branches the Happy’s menu expanded to include; at first, traditional Bulgarian dishes; and later on… Japanese! Yes, a whole additional meny of sushis, sashimis, miso soups and seaweed salads was added. I know. Despicable. Yet, somehow endearing it is to imagine the founders of Happy - I imagine them as at least two, not sure why and have no idea how many are they indeed - sitting in their first Happy restaurant in their native Varna by the Black Sea, eating a battered chicken ribbon and thinking “If only, if only I could now have a juicy кебапче and a spicy кюфте with a little sip of ракия and some мешана салата” - so they decided to add the Bulgarian dishes. And then few years later I imagine the Happy, let’s call them brothers for convenience, sitting in their second restaurant in Sofia on the Valley, eating a Tatar meatball sipping on a rakia and thinking “If only, if only could I now have a bit of raw tuna, to match my new social status and brand new understanding of healthy food”. For you see, every enriched man starts thinking of immortality, hence, healthy food. And so they did. Added the All Happy Sushi Menu to the existing 100 fusion dishes one. Which after all brought some peace to our family gatherings, as now I can drink green tea and eat emerald seaweed, ruby tuna and coral salmon; while my father sipps on vegetable soupe, my mother orders all things fried on the menu, my son devoirs three types of meets cavarma and etc. All good when it ends up good.

But enough history. Happy have always had this special thing about central locations: “If it is a crow let it be shaggy” as go the Bulgarian saying* and here it is at Piccadilly Circus now. Straight above the funniest place in town - the Comedy Store!, where last Thursday I laughed my head out with two Sarah's and a Karen, a Funmbi and a Tim and a Cockley Skinhead Grand Dad all very funny. The thing with stand up binging being that I sort of remember the first two gigs, but less and less each following. I think that by the third gig of the set of six I was so high on laughter that I got completely and entirely disorientated. I imagined flying in space a little bit like that.. - with its endless menu where even a Bulgarian Shopska Salata can be found. Only the sushi bit is missing, but I am sure it will come around soon. Happy’s Pre-Theatre Menu** still reads though Chicken Stripes - they should take my advice and call them ribbons to match better the cordon - and Cordon Blue.

Thinking about it: Happy is just the number Piccadilly needs in its Circus with its versatile menu and fast service. Last but not least, and despite my half-life-long-guerilla opposite Happy, whatever they serve there is better than the pizza and chips served at the Comedy Store - after all each with their specialty. Hence, lucky bingo is this double decker laugh and Happy food act.

*Otherwise interpreted by the dictionary as “ in for a penny, in for a pound; go the whole hog; as well be hanged for a sheep as for a lamb”