Once upon a time there were two railway stations who lived right next door to one another. One was called St Pancras and the other King’s Cross. They were always quarrelling as to which was the better station.

“I have diesel engines as well as steam engines at my station,” said St Pancras.

“And I’ve got a cafeteria,” said St Pancras.

The Party at Hansom

Drowning inspiration from books is an old hobby of mine.Take vodka and Russian authors. In my youth while still living in Bulgaria, where the winters were long and snowy, I used to read Russian authors in the winter - no better season for thick books - where the characters drink a bottle a page ( And I am not merely talking about Moscva-Petushki here, I am talking about Ana Karenina and other respectable novels). Then, I would go out in the evening and try to drink vodka - a drink I systematically failed to like until, paradoxically,   moving to London.

Drowning inspiration, mind you not wisdom, from books actually runs in the family. According to the family legend, at the first date of my parents, my mother, then reading some unmemorable novel about a distant Caribbean adventure, decided to order rum. Not long after, my father had to carry her home, lean her against her front door, ring the bell and run down the street, reluctant to face my grandfather.

Continuing precisely this tradition and with Elizabeth Day’s The Party in hand I perched on one of Hansom, St. Pancras many brightly coloured sofas.

In case you have forgotten - the Bedu that I am Ioves train stations. And hotels. Hence the combination between these two elements - EuroStar entering a train station which is also a hotel - at  St. Pancras stirs in me feelings, I imagine, not unlike those of my ancestors at the site of a long camel caravan entering an oasis.

In Hansom, St Pancras’ central bar, I came with the idear to order an Old-fashioned, as I've read about it in The Party. And believe it or not, the massive whisky drinker - provenant of two massive whisky drinking nations that are Bulgaria and Iraq - I have never ever drank an Old-fashioned nor have even heard about it before reading the paragraph in The Party (now alas I cannot find for a literary quote) where the two main characters, a newly formed couple, drink Old-fashioneds in, unfortunately, unnamed bar. Here Lucy explains how much her boyfriend Ben, hates his Old-fashioned served in a square rather than a round glass and how fussy wass he about it. Which, precisely, fussiness provoked my curiosity.

Lately, I often wonder how was I reading books before google. I must have been missing half of the subtleties. And no wonder that I nowadays read a book per month in contrast to a book every three days twenty years ago. Now I search for most of the words in the online Oxford dictionary, as I like to check their "provenance", and then by the time I google all the drinks the protagonist drink and googlemap all the places they go - here is the month ended.

Anyhooo, the Hansom serves Gold-fashioned instead of Old-fashioned (as for the V&A in the description below, just forget about it. It is irrelevant) - and no wonder at the coast of £16 - but it tastes like millions, and it glows with the colours of an autumnal sunset, and it comes in a round! glass with very many little edges, so that drinking it scratches your fingers as well as your tongue and brain.

As for The Party, the most intriguing bit of it is the epigraph, which is the entry for the word “party” in the dictionary as : a social gathering, a political group, and a person or group of people that constitute a side in an agreement. The book itself though deals entirely with the misadventures of a young man from a working class in his years of studying in a public school and later on mingling amidst people of higher class. Grown up in a communist country, where the Working Class was a Queen, and everybody was one or another sort of worker (ex. scientific worker, while in England the only workers I’ve heard about are the sex workers!) I found the read rather curious. For those more familiar with the class system and its manifestations I guess it might be boring.

Therefore, head straight for Hansom without the literary prelude of The Party.

And I don’t want to hear anymore about my spelling mistakes! If a whole train station has missed an entire Delta from the name of its central bar, who am I to spell better?

More about alcohol in Russian literature here (mind you the whole Tolostoy is missing; let alone the contemporary guard) 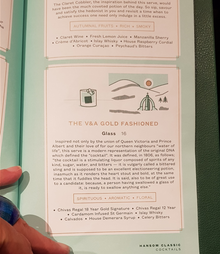