Lincolnshire Haverholme Priory, the Finch Hatton Family and its link to Africa 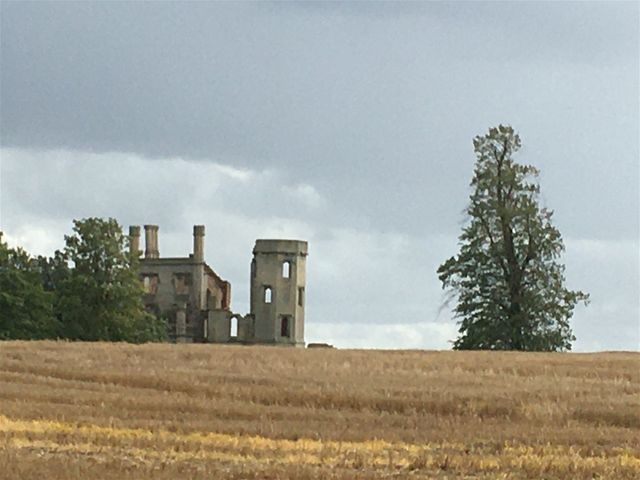 The priory has a ghostly reputation with ghostly footsteps reported to have been heard in and around the ruins.

Meander slowly along those, oh so incredibly straight roads, that cut across the bleak flat fenland of southern Lincolnshire and it won’t be long before you spy a church steeple in the distance, its creamy yellow stone blending in with the landscape or standing starkly against a watery blue sky. To some, the fenland, where earth meets the sky, unhindered by obstacles, can feel oppressive, to others it represents an opportunity to greet the sun in all its blinding glory as it peeks above the horizon. The straight lines of the Lincolnshire countryside contrast with the swirling fog that frequently sweeps down cloaking the landscape in ghostly white. It was this damp, inhospitable climate that sent the Cistercian Monks packing, the first occupants of Haverholme Priory, founded in 1139, leaving it to the Gilbertine Order who stayed until its dissolution under Henry Vlll in 1539. And was it perhaps this climate that prompted Denys Finch Hatton, centuries later, to also leave the fens and his home, the Priory, having now been bought by the Finch Hattons, (the tenth earl of Winchelsea) to seek the heat and opportunities that colonial East Africa offered him?

Haverholme Priory’s history is long and chequered. It now stands forlornly against the wide open sky, half-dismantled, the victim of a wealthy American woman’s desire, who bought the Priory in 1926, to transport it stone by stone to America. But it wasn’t to be. The first shipment of stones stood on the dockside in Liverpool awaiting their new owner, when she was tragically killed in a train crash; possibly the victim of the curse that was added in the Priory’s foundation charter, ‘that if anyone caused harm or injury to the Priory and its inhabitants, being unrepentant they would be condemned and cursed.’ The stones were never shipped. The treasured items ended their journey not in America but in the redevelopment of the new Liverpool docks. Due to this selfish* desire, Haverholme lies in ruins to this day, its history and stories exposed to the harsh damp elements of the Lincolnshire fen. But what of its days before it was dismantled?

Haverholme Priory, which lies 4 miles north east of the town of Sleaford and about a mile from the tiny village of Ewerby, began its days as a monastery. In 1113 Alexander, Bishop of Lincoln offered the site of Haverholme Priory to the Cistercian monks of Fountains Abbey. After two years they re-established themselves elsewhere and Haverholme was then offered to the Gilbertine order who sent nuns and brothers to inhabit the new buildings of what was to be a double monastery. Along with the upkeep of the monastery the Gilbertines inherited the responsibility for keeping the neighbouring fens drained and to maintain a foot ferry to Sleaford across the River Slea. It is rumoured that in 1164 Thomas Becket hid at Haverholme during one of his arguments with the King.

In 1538 Henry Viii dissolved the Priory and it was put up for auction at the Corn Exchange but remained unsold for some time. Over the next two and a half centuries after the dissolution the Priory had various owners and was rebuilt several times, once in a Tudor style in 1780, whilst the ruins today are the remains of a gothic building built around 1835. Haverholme was inherited by the Finch Hatton family, George Finch Hatton 10th Earl of Winchelsea and 5th Earl of Nottingham. The Priory was occupied by the Finch Hattons for almost a century before falling on hard times.

Sadly by the 1920s the Finch Hattons had to put the house up for sale and the rest of its fate we already know. But before we leave Haverholm Priory let’s take a look at possibly its most famous occupant over the centuries, Denys Finch Hatton. Denys was born in 1887, the second son of Henry Stormont, 13th Earl of Winchelsea and Anne Codington. Denys spent his early years in the Dower House in the nearby village of Ewerby then later at Haverholme when his father inherited the title.

Denys was born in Kensington, London and educated at Eton and Oxford. He excelled at athletics and also became secretary of the music society but was not particularly academic, achieving only a fourth class degree in Modern History. In 1911 Finch Hatton emigrated to British East Africa, today’s Kenya and bought a farm near Nairobi later on setting up a series of trading posts in the Masai Tribal Reserve. During WW1 he became an aide de camp to General Hopkins in Mesopotamia and by 1918 had qualified as a pilot. He returned only briefly to Haverhome in the 1920s when the Finch Hattons were forced to sell the estate.

Back in Africa Denys spent most of his time organising safaris at a time when colonial lifestyle was at its most glamorous and prosperous. His passion for flying allowed him to view the vast African landscape. He campaigned to establish the first African wildlife preserves and to ban hunting from vehicles. Whilst out in Africa he met Baroness Karen Von Blixen and the couple established a coffee plantation at the foot of the Ngong Hills. They shared many interests such as music and went on long safaris together taking a gramophone with them. The friendship developed into a love affair although it didn’t last and by 1929 it was over. Just two years later Denys was killed in a flying accident aged 44. The film Out of Africa based on Karen Von Blixen’s book, My Africa immortalised their love.*

For further reading on Denys Finch Hatton, Silence Will Speak, a biography by Errol Trzebinski.