The Story of the Travelling Tea-Glass/Cup Holders

A couple of weeks ago I received an enquiry regarding three tea-glass holders. I was very intrigued, but the enquiry wasn’t clear as to whether the person (Adrian) had the holders and wanted to know about them or was looking for similar, but on further questioning it turned out that Adrian already owned the holders and it was the former.

Adrian wrote, “I got the teacup holders on a second hand market, some time ago and decided to find out more about them. I don’t know if I mentioned I live in Denmark and there was nothing else on the market that looked like the holders. The three holders are not the same but do look quite similar. They are not made out of silver but probably brass”.

I am no expert on tea glass holders but they looked Iranian to me, although I wondered how they had turned up in a town in Denmark, and could they possibly be antique? I thought of all of my connections to Iran and experts on Iran and Antony Wynn, Chairman of the Iran Society in London came immediately to mind, so I emailed him with the query, plus a photo of said teacup holders and received a very quick and comprehensive response.

Antony wrote, “These are very common tea-glass holders, probably made in Isfahan. Hard to tell the age from a photograph, as they are still being made. They are modelled on Russian designs, as it was the Russians who gave the samovar and the ‘istakan’ (tea-glass) to Iran, where tea had previously been drunk out of bowls as they still do in Afghanistan.”

I sent the answer over to Adrian, really pleased that I had been able to help him find out about the holders, and likewise so was he. Here is his reply: “Thank you very much indeed-that was a good piece of work. Now I know where my cup holders are from and am very happy to know it’s not an antique, but a useful daily piece of usage.”

I was intrigued to know how Adrian had come across LAAF and he wrote:  “ I came across your page ‘LAAF on tour’ by making a search on the net for ‘cupholder Iran’ (or something like it.) I would like to thank you very much and I will keep an eye on the website.”

And it was then that the idea of a story surrounding the holders might be of interest appeared. The thing that intrigued me more than anything was all the connections from Denmark to LAAF, to me and my connection to Iran, to Antony and back to Adrian. ‘What a fascinating place the world is,’ commented LAAF’s editor. I wanted to know more about Adrian’s story of how he found the teacup holders and why he bought them. So I decided to ask Adrian if he could tell me more, so what follows is Adrian’s own account of the teacup holders and how he came to be the owner.

“I actually saw the holders about four weeks ago in a second-hand shop, in Ebeltoft, about 30 miles from home, but didn’t buy them at the time. It was only after I got home, I had second thoughts about them and decided about a week later to go to the shop and buy them. It should be said that I am a pensioner and have the leisure that I can go for drives around the countryside, whenever it suits me, so I drove off to Ebeltoft to have a second look. When I got to the place in the shop where they had been, to find the holders, they were unfortunately not there anymore and I asked one of the shopkeepers, if she knew. No luck and I was about to leave, when another lady who actually works there as a volunteer, as all the profit that they make goes to work in 3rd world countries, suddenly she remembered that they had moved things about and the cup holders were put nearly out of sight on the bottom shelf at the other end of the shop. So I thanked her and hurriedly bought them. It was only after I got back home, that I started to wonder about their story, and started to look around on the Net and found you. I will go and ask them in the shop if they remember where they got the holders. I had a bit of a look around and found some holders very similar in an auction. It is a silver set but they still look similar.

I had a look on the website and was surprised to see a set of four tea-glass holders priced at €120."

So when Adrian does find out more, I will post it here.

The auctioneers website Adrian is talking about is here https://www.liveauctioneers.com

And although Adrian is not bothered about the monetary value, maybe it will turn out that the tea-glass holders are worth a little more than he originally paid for them.

Note: teacup and tea-glass holder are interchangeable. I have used both in this text but the meaning is the same. 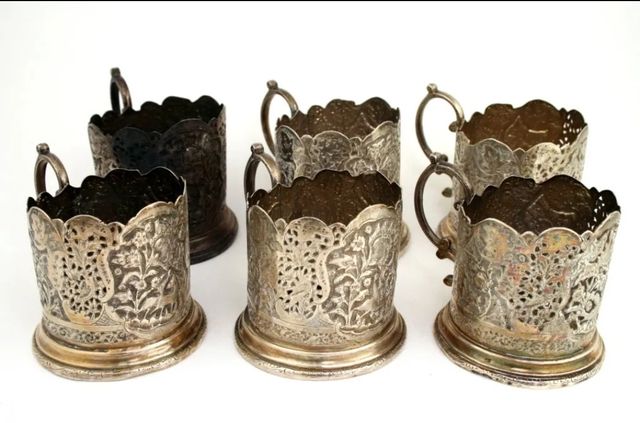 A set of silver teacup holders